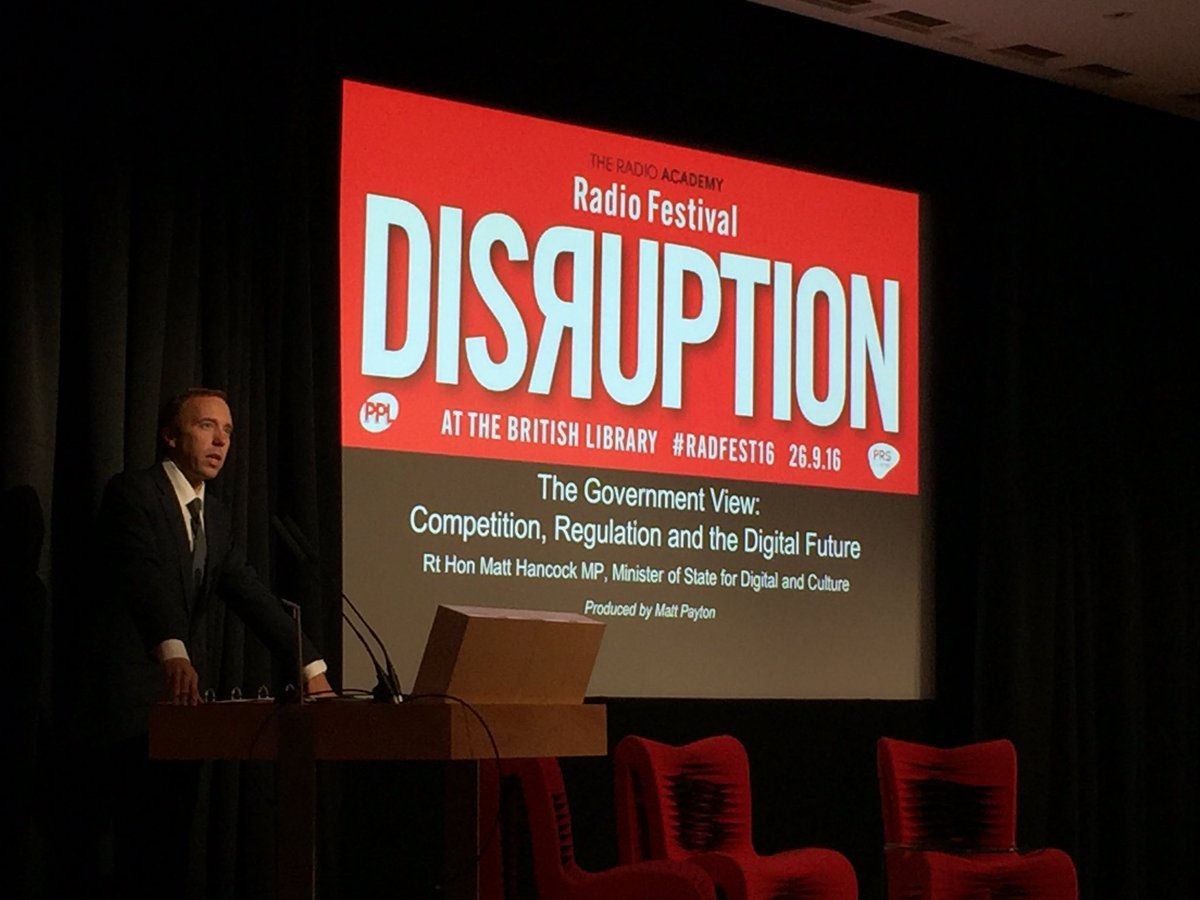 What do you get when you put David Baddiel, Bob Mortimer, Scott Mills, Nick Robinson, Deacon Blue, Jo Whiley and the Culture Minister, Matt Hancock, all in one room?? Answer: Radio Festival, of course.

This week (Sept 26th) saw the radio industry gather for its annual conference, Radio Festival, held at the normally hushed and hallowed halls of the British Library in London, under the theme of ‘disruption’. And, as ever, Radio Festival duly delivered.

Culture Minster, Matt Hancock, who, following a session with Radio 1’s Scott Mills and a live game of ‘innuendo bingo’, managed to deliver his entire speech with the words ‘cock gobbler’ on his autocue screen. Not a phrase you’ll hear uttered very often in the British Library (nor many other places for that matter!) but Hancock made light of the situation, sharing the screen ‘malfunction’ with the audience and, um, milking it for laughs.

RepComms, who were managing the press and PR for the day, had filled the audience with trade press, bloggers, radio reporters and national newspaper journalists to cover the ministerial moment. However, traditional turned to social as the Daily Telegraph’s media correspondent, Patrick Foster, shared the ‘cock-gobbler’ moment on Twitter. The Sun, Mirror, Huffington Post and Spectator followed the story – what this says about the mind set of Her Majesty’s Press is something on which we can barely begin to speculate.

But we’re pleased to say, there was also plenty of coverage for his policy announcement to put forward a proposal to deregulate UK radio.

BBC Radio 4’s Nick Robinson, also joined the line-up, sharing some of the highs and lows of his first year presenting the Today programme, with naturally enough, Brexit proving to be something of a high-point. RepComms used to work with Nick Robinson when he was political editor of ITV News and we’re delighted to report he was, as ever, an absolute pleasure to deal with.

The Radio Festival is a moment in the when the entire audio and radio industry can come together to share content ideas, discuss some of the challenges facing the industry and celebrate its achievements, not least of which is the fact that 90% of the population tune into radio every week. In a digital age, that’s something of an achievement.

However, never an industry to be complacent, the Festival also heard from Patrick Walker, Media Partnership Manager, EMEA, Facebook and Stephen Nutall, Senior Director, Youtube as it is crucial that radio continues to reference itself to the broader media landscape and the competition it faces for people’s ears and time.

There was also plenty of surprises with a performance from the Dead Ringers team, Fran Healy of Travis sang ‘Why does it always rain on me??’ whereupon the heavens duly obliged. And on the subject of storming, Deacon Blue did what they do best with a live set including tracks from their new album, Believers, as well as some get-em-out-of-their-seats favourites like Wages Day and Dignity.