Radio remains in the driving seat for motorists across Europe 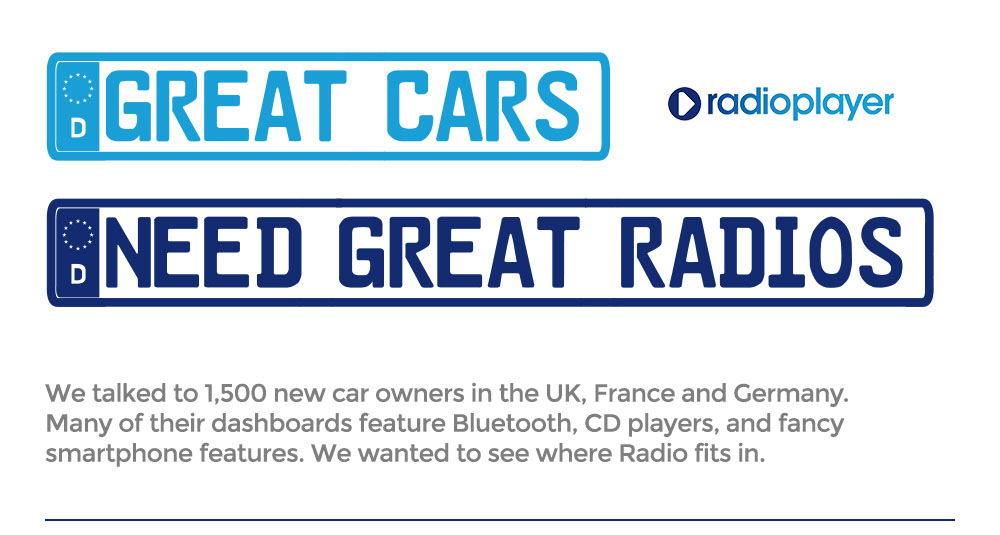 Eight out of ten new car drivers would never consider buying a car without a radio, according to the biggest ever survey of drivers across UK, France and Germany.

Drivers think radio is as ?vital as tyres and a steering wheel?* according to research launched today (Feb 10th) at a European Broadcasting Union conference in Geneva.

In the biggest survey of its kind ever undertaken in Europe, all respondents had bought one of the top 20 European car brands within the last 3 years, ensuring a fair comparison between radio and alternative audio options (like music streaming and smartphone integrations), present in more modern cars.

The results show radio?s continued dominance of the dashboard, delivering 75% of all in-car listening, with 84% of drivers ?always? or ?mostly? listening to radio on every journey.

When drivers were asked to nominate the one entertainment source they?d keep in their car above all others, it was overwhelmingly shown to be radio, chosen by 69%, with UK drivers feeling particularly strongly at 73%.

There were surprisingly few differences across age, gender or car-type, when looking at almost every aspect of in-car radio, including across the younger demographic of 20 ? 29 years old. 78% of them would not consider buying a car without a radio (only 4% less than the average).

Across all three countries, 90% of respondents believed radio should always be free to use, with 65% of drivers not happy to pay for an app to access the radio in their car, and the Germans feeling most strongly at 71%.

The survey was commissioned by UK Radioplayer, the not-for-profit partnership between the BBC and commercial radio. The Radioplayer model has now spread to Germany, Austria, Norway, Belgium, and Ireland ? and these six countries are working together to help grow radio across Europe.

The research comes as the latest UK RAJAR figures (Q4 2015 issued 04/02/16) revealed that a higher proportion of radio listening is being done at the wheel than ever before.

Michael Hill, Managing Director of Radioplayer said: ?Seatbelt, ignition, radio. That habit?s clearly as ingrained today, as it was 20 years ago. Now we need to act in partnership across the European radio industry, share this research with the car companies, and work together to build the dashboards of the future.?

The research is supported by the two largest European broadcasting associations ? the EBU (which represents public broadcasters), and the AER (representing private broadcasters).

Helen Boaden, BBC Director of Radio said: ?33 million people listen to their radio in their car every week in the UK alone. It?s one of the great pleasures of driving, so it?s vital that working together through Radioplayer, our industry keeps the radio habit alive and thriving across Europe.”

Siobhan Kenny, CEO of Radiocentre said: ?These fantastic research findings come as no surprise to Radiocentre.? Radio remains the essential source of information and entertainment for the overwhelming majority of motorists. It stands to reason that a massive 82% of drivers across the UK, France and Germany would not even consider buying a car without a radio. We relish the opportunity to join Radioplayer in spreading the word: radio is here to stay.?